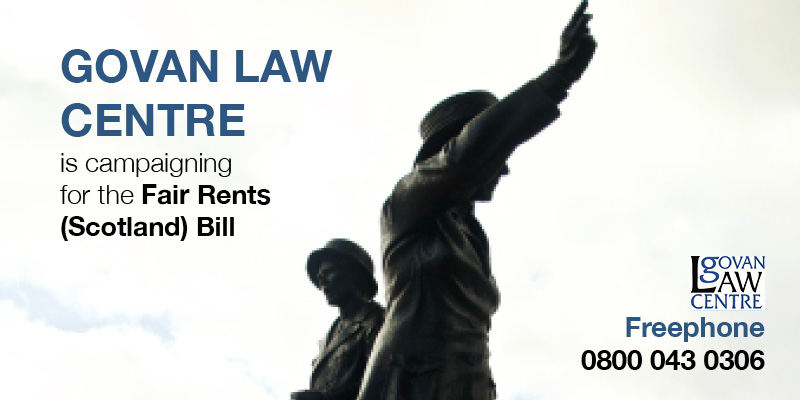 Govan Law Centre is calling on politicians and campaigners housing and homelessness organisations to support the Fair Rents (Scotland) Bill.

On 1 June the Fair Rents (Scotland) Bill was introduced and published in the Scottish Parliament. It’s a member’s bill by Glasgow MSP Pauline McNeill that seeks to protect private renters by introducing measures to limit and control rent increases in a fair and measured way. It’s long overdue. We’ve not had anything like this for over a century in the UK.

Mike Dailly, solicitor advocate for Govan Law Centre, drafted the bill and various accompanying documents, working with Pauline and her team, colleagues at Govan Law Centre and the Parliament’s legislation team. It’s been a real pleasure working with everyone involved, and it’s a great team success to get this far so quickly.
This bill is proportionate, socially just, targeted and capable of attracting cross-party support. A contribution to a much-needed wider solution to help protect many of the most vulnerable Scots adversely affected by the Covid-19 pandemic.

At present, the law on rent levels and increases is a one-way cul-de-sac that benefits landlords. Under the Private Housing (Tenancies) (Scotland) Act 2016 a landlord can put your rent up once every year.
As a tenant, you are immediately on the backfoot. You have a right to try and argue for the status quo. That’s a bit like asking the tide not to come in. In practice, rents just go up. And keep going up. Every year at double the rate of inflation if you live in the central belt of Scotland.

The average rent for a two bedroomed flat in Greater Glasgow is £780 per month. In the Edinburgh and the Lothians, it is £972. Compare that to the average rent of a similar housing association flat – £354 from the GHA in Glasgow. Or a council flat – £447 for the equivalent sized flat from Edinburgh City Council.

All too often you get double the price but half the quality in the private rented sector compared to a council or housing association home. For many Scots, there is zero choice. You can’t vote with your feet because you have no other option. You can’t get a house in the social rented sector; nor can you access a mortgage. It’s Hobson’s choice and a never-ending story of higher rents.

Since around 1965, a “fair rent” in the UK has meant a purely open market one in law. Private sector rents go up in a neighbourhood, so it’s legally “fair” that you have to pay an inflation busting hike in your monthly rent. That’s the market – one direction of travel. The tenant is the end user, who picks up the tab even if they are the least able to do so.

The Coronavirus (Scotland) Act 2020 has only kicked an impending avalanche of evictions down the road. The provisions which extend eviction notices to 6 months, and make mandatory grounds of eviction discretionary, will all be repealed on 30 September (unless extended). In the central belt of Scotland, the private rented sector is an overheated market that needs to be cooled down.

Pauline McNeill’s bill would do this by capping future rent increases to no more than inflation plus one percent each year. This amount could be lowered or increased by the Parliament subject to different provisions for different circumstances. It’s a flexible solution.

Price caps are not unusual in the UK. The energy regulator, Ofgem, has the power to cap energy prices. The UK minimum wage is a wage floor cap.

In 2015, HM Treasury allowed the Financial Conduct Authority to introduce a price cap for short-term-credit to tackle the excessive profits being made on pay-day loans, and the over indebtedness of consumers with repeated roll-overs of loans.

Why shouldn’t a tenant have a right to seek a lower rent? The bill would empower a tenant to apply to the rent officer (or First-tier tribunal on appeal) once each year for a lower rent to be fixed.

A lower rent would have to be set where the condition or quality of the property was poor. This would include poor energy efficiency for heating and an inadequate standard of furnishings and decor. This would help create an incentive for landlords to provide better value for money for tenants.

It isn’t just younger people or those in the gig economy who end up as unwilling private renters. The number of older people in the private rented sector has doubled in the past 18 years. A recent Scottish Widows report revealed that future retirees will be spending 42% of their pension income on private rents.

Unless the Scottish Parliament embraces Pauline McNeill’s bill, Scotland will continue to fail private renters when it comes to social justice, equality and fairness.